Virginia’s interest in art began when she was a child. She was fascinated with color, especially in nature. She took every form of art class offered, and credits her high school art teacher, Mr. Kyper, with his support in recognizing that every student had something to offer. His sarcastic nature was not unlike her own, and Virginia felt a comfort in that classroom like never before or after.

Working in oils, pastels and watercolor, her first choice then was oil painting. After high school she decided to go to college. College at Ohio State University required early morning classes and an afternoon/evening and weekend job as a veterinary technician to pay her way through school. Ohio State was not an Art school, but she took drawing, sculpture and oil painting courses and after two years moved to Michigan where she studied classical guitar at Oakland University in Rochester, Michigan. Living on a farm, driving 60 miles one way to attend classes and continuing to work as a veterinary technician and then as a DECA advisor at a vocational school in Lapeer, Michigan, painting took a back seat for many years.

Virginia moved to the Mt. Washington Valley In 1983 after a summer as a camp counselor in the area. She became proficient in graphic arts working for The Mountain Ear for 17 years, and then left to work as a freelance graphic artist and as a hiking guide for New England Hiking Holidays. Always an animal lover, she had a horse and three Labrador Retrievers. On a trip to Hawaii she got word that her dog Sophie had aggressive cancer and she passed before Virginia got home. It was devastating. As a way to feel better, Virginia painted Sophie’s portrait. Not her favorite or most professional painting, but it was a beginning.

All her friends wanted one of their animals, and so she did a few more. They encouraged her to start a business doing them for others and so it began. Virginia began visiting art shows and took custom orders. When she entered the non profit world in 2001 at The Mount Washington Observatory as the graphics and publications coordinator and later as the events coordinator, art took a back seat again. She became the Development Director for The Conway Area Humane Society In 2006 and later went on to become Executive Director for the shelter until March of 2019. She is currently working as a pet portrait artist and doing some limited pet sitting and animal care. 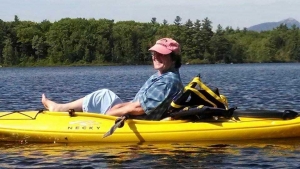