When I first came to The Mt. Washington Valley from Michigan, it was Memorial Day, 1983. I had driven all night to get to water sports camp so I could get my certification to become a canoe instructor and camp counselor at Camp Walden in Denmark, Maine. I drove straight through and journeyed through the Green Mountains of Vermont in the pre-dawn of early morning. I entered North Conway as the first light of day was casting what I later learned was Alpenglow on majestic Mt. Washington, which was still covered in snow and looked like something one would see in Colorado, not New Hampshire. Having grown up an Ohio flatlander I thought of New England as a place one goes to see the ocean and beaches, not giant snowy mountain peaks. I couldn’t believe it, and I looked forward to a summer that would be filled with adventure and the opportunity to learn more about this beautiful part of the country I had never visited and knew very little about.

Little did I know that day I would return to the Valley the following September and make it my home. Beginning July 2001 I began working for the Mt. Washington Observatory as the editor of Windswept, the organization’s quarterly journal. I did this job for six years. It was a dream job for me, and it was where I learned about non-profits, fundraising, working with boards and volunteers and teamwork. I loved it. The only thing that could lure me away was the opportunity to do the same work to benefit homeless animals, so I made the decision to embark on a career in animal welfare at an animal shelter that was very new to the Valley. In my time at MWO I met some wonderful people, many of them still good friends who live in or near the Mt. Washington Valley. One of those wonderful people is Charlie Lopresti, Chief Meteorologist at WGME Channel 13 in Portland, Maine. I met Charlie shortly after I started working at the Obs, as he worked atop the mighty mountain as a weather observer. After he left the Obs it was fun to watch his career blossom at WGME, where he still reports the good news/bad news and ever changing New England forecast. 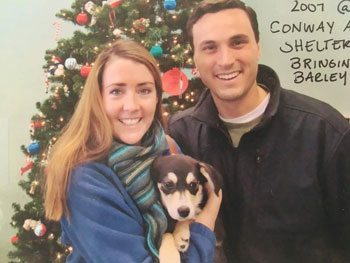 I saw Charlie again a few years later at the shelter’s 2007 holiday open house. A transport of dogs and puppies from Alabama had just come on to the adoption floor, and they were waiting to get homes for the holidays. So, in walks Charlie and his wife Morningstar, excited to add a four-legged pup to their family. The excitement of seeing Charlie again, meeting Morningstar and being a part of helping with the match for an addition of what turned out to be an amazing member of their family was one of those moments when I knew I was right where I was supposed to be. They named him Barley.

I saw them now and then at winter events in the Valley, and when the shelter ran a fundraising campaign in 2008 Charlie and Barley came to Four Your Paws Only to help with the project, which turned out to be very successful in raising funds to help keep the shelter in operation. In ten days we raised $130,000. The little shelter that could continued to grow over the years, and now and then Charlie and Barley would show up at a fundraising event. It was always great to see them.

Then, one bleak winter day last January I received the following email from Charlie:

Hi Virginia. I hope everything is great with you and CAHS these days. I often think if I never met you at MWO I never would have known my best little friend for the past 11+ years. It’s funny how life works. We had to put our dog down last week and I’m just getting to the point I can talk about it. I know you’ve been there too, and this sadness is unlike anything I’ve ever experienced. It’s getting better though. I just wanted to drop you a quick note to say thank you for the work you do at CAHS. I wrote a quick shout out to the shelter and tribute to Barley. Also, I thought it would be pretty cool to share with you the first photo in Dec 07 at the shelter next to the last photo at the bus stop last week. http://checkinwithcharlie.bangordailynews.com/2019/03/07/home/a-dog-from-alabama-who-found-a-home-in-maine/

I offered to do a painting of Barley for them, and they were happy to have one as a tribute and remembrance to a great friend and much loved member of the family. Charlie collected some photos, really wonderful photos, and sent them to me. The favorite was one of Barley doing what he loved most, sitting in the field watching the hawks and other birds fly by, so I went with that. Here is the result, and they received it today. 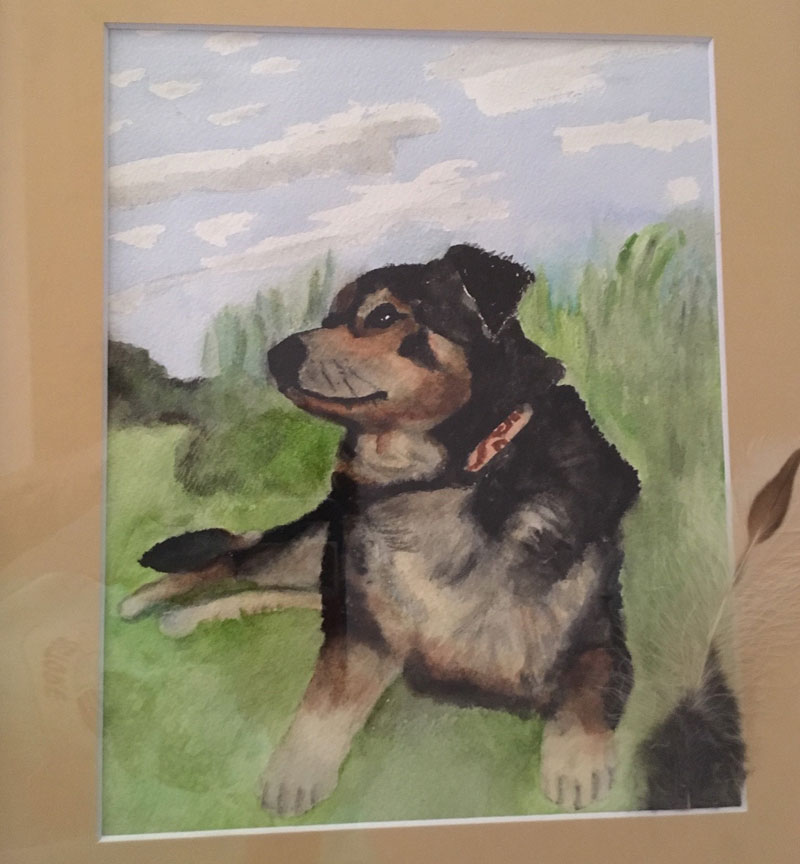 Charlie’s note to me said “you were there in the beginning of our life with him, and ironic that you are here at the end. Thank you, we love it and it is already hanging in the dining room.

RIP Barley, know you were loved well and you will live on in the hearts and memories of your family.

Want to join the discussion?
Feel free to contribute!