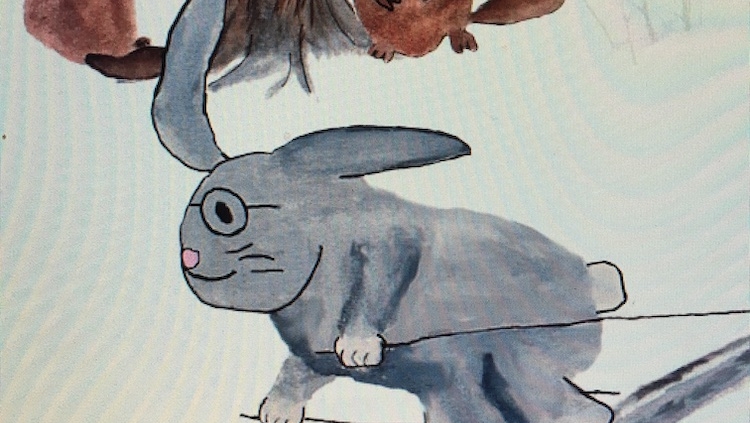 Happy December everyone! My well intentioned plan to blog at least every couple of weeks has fallen by the wayside. However, here we are a few weeks away from the Christmas holidays and I am happy to say that all of the paintings that needed to go in the mail have safely arrived to their destinations. There are still several to do and I am available to take on a couple more.
One reason I have not blogged since my trip to Cornwall this past October is because I came home to a job illustrating a children’s book for a friend. This book was not a book to be published for sale, but rather as a gift for my friend’s grandmother who was the author of the book. At age 90, it was a perfect gift as she wrote this story years ago about a rabbit named Wacker. Wacker, along with his beaver friends Billy and Bobby, an owl named Wendell and a deer named Denise, invented the sport of skiing in Jackson, NH. So my task was to read the book and create the visual of each character and then put them into scenes from the story. Easy, right? Well, after drawing page after page in a sketchbook filled with creatures I finally took out the watercolors, found photos of each animal and used photos as a resource to create whimsical characters. Then I picked my favorite and most powerful scenes and inserted the characters along with snow, trees, forest and ultimately skis made of birch wood with a rabbit sporting eyeglasses speeding down a slope much to the joy of his animal friends.
It was a lot of work, something new to me, and something that made me feel good because I knew it was going to make the author feel good. And, anyone reading this charming story can’t help but smile. A story about family, friends working together, helping each other through hard and scary times, and ultimately reaching their goal together, how can you not love being a part of that? So, I get to add illustration to my resume and I have a signed copy of “Wacker’s Secret” of my very own, something less than 100 people can say. I am sharing the cover with you here, as well as my joy at being a part of something that made others feel good. That was a much greater reward than any monetary gain from being involved in such a project. Isn’t that what this season is all about?

Want to join the discussion?
Feel free to contribute!

Purr-fessional: Working As An Entrepreneur In Harmony With Your New Pet –...
Scroll to top