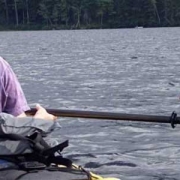 “Look! What’s that floating out there in the middle of the lake?” queried Virginia Moore Tuesday evening, as she and her brother, Terry Moore, of Sedona, Ariz., and friend, Judi Paul, of Chocorua were paddling on Conway Lake.

“I don’t think so. I’m paddling over to check it out,” said Virginia, who is the executive director of the Conway Area Humane Society, and who is well-known as a lover and rescuer of animals, mostly cats and dogs, but now she can add another species to her list:

That’s right, a grey squirrel, to be exact.

“I thought it might be a snake; Judi thought it might be junk. But I saw something move. So, I paddled over and saw it was … a squirrel,” Virginia, said in an interview Thursday afternoon. “It was swimming, in the middle of the lake. It was doing a dog paddle — no, make that a squirrel paddle,” laughed Virginia, who was taking a day off Thursday with family and friends, prior to getting ready for the Conway Area Humane Society’s upcoming Walk for the Animals and Bark in the Park Pet Expo fund-raiser, set for North Conway’s Schouler Park Sept. 21.

As far as we know, there will not be a squirrel category, but one never knows.